This article originally appeared in Pyramid #21

The entries just kept coming, and coming . . . and coming.

So many entries that we couldn't look at them all in time to get the winners into the last issue of Pyramid. I spent an entire fun-filled week opening envelopes and looking over entries, and I was (mostly) very impressed with the deviousness of our contestants.

When the counting was done, we received 1,483 entries from 144 different people. Entries came from all over the world (10 foreign countries in all) and 27 different states. While many people sent in just one card, we got 56 cards from one person, and quite a few others sent in 20 or more. (By the way, our minions at the U.S. Post Office appreciate that several of you sent in your entries one to an envelope, though that was not required — the extra postage you bought will support our [NOT AVAILABLE AT YOUR CLEARANCE] plans in the [CENSORED] and [CENSORED]).

Some entries we couldn't accept for various reasons. The most obvious one was our prohibition against using other people's trademarks, though we must admit the "Pinky & The Brain" Illuminati card was inspired. Illegal, but inspired. And lots of people tried to do things based on "The X-Files," none of which we could use.

Another problem was with incomplete cards. Group cards that didn't list where the arrows went (or even how many there should be) topped that list, though there were other examples. Card ideas that included entirely new alignments, attributes or rule concepts, while showing a lot of initiative, were also outside the scope of the contest, though the ideas might show up in a future INWO supplement. We also rejected cards that simply rehashed existing cards or were too unbalancing.

That left plenty of other cards to judge, however. The single most popular idea was for a "Bill Gates" card — we must have gotten 15 or 20 of those — though "Excalibur" and "Atlantis" weren't far behind. Classic conspiracy theory got quite a workout as well; we received several "Grassy Knoll" cards, as well as "The Law of Fives" and other Illuminated ideas.

But enough from me. Here's Evil Stevie:

I was extremely impressed with the quality of submissions. There were a lot of good ideas here. Lots of duplications, of course . . . cards for Atlantis, Steve Jackson Games, combined assassinations, Trailer Parks as disaster magnets . . .

Cards were judged on originality, humor, weirdness and applicability to the game as it stands. For instance, because the game has lots of Disasters and Assassinations already (maybe too many), these cards were not favored. Things that help Places and Personalities, on the other hand, are needed in the game, and were favored. Great art counted, too, especially funny art.

The most common reasons for rejecting entries were duplication of existing cards; use of specific trademarks or other intellectual property of others; and too many words. We can only put so much on a card . . .

Note that of the 15 winning cards, three people had two each. We considered a "one prize per entrant" rule. Naaaaah. If you're good, you're good.

And here's the word you have been waiting for: I am working on another INWO supplement. Between the cream of the contest crop, and the ideas that came sparking as we read the entries, I'm inspired again . . . Don't look for it next week, though. Mid-1997 might be more like it.

And now, without further ado, The Winners . . .

Okay, a little bit of ado. I've changed phrasing on some of these cards when I thought they needed it for clarity. In those instances where I wanted to make a major change, though, it's in my comments below the card text. 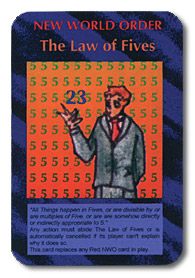 THE LAW OF FIVES, NWO Red

At last: a card even more annoying than Registered Trademark! This is the grand prize winner because it's not appropriate for any deck, but will benefit those players who can think fast and Illuminatedly. Suggestion: find a five before you declare the action.

This card has a lot of "jerk potential," and a tournament referee would be justified in banning it. But wouldn't it be better to ban the jerks?

Yes, that's right: the Illuminati declared a grand prize winner and then said it could be banned. Fnord. 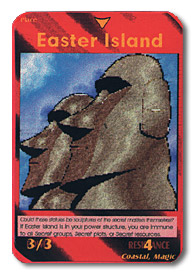 This is good not just because it's an Illuminated mystery that was not yet in the game, but also because the game can use an antidote to the dreaded all-Secret deck.

JACK OF ALL TRADES

"Specialization is for insects.'' — Lazarus Long

Link this card to any Personality you control. This is an action for that Personality. Any Plot card that requires an Action token may now use this Personality's action, even if the card normally requires some attribute or alignment the Personality does not possess. All other requirements of the Plot must still be met.

Nice and simple, and lets you improve a Personality in ways that encourage further creative play. This card would be good for deck-builders. 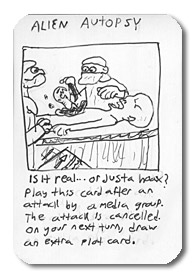 All right, we had to do something with the Alien Autopsy! This one is nice and simple, definitely useful, and includes a good idea (immediate draw of a replacement) to make it even more useful in a modest way.

Play this card during any non-Privileged attack. Every player must contribute an action token to either the attack or defense, or let either the attacker or defender draw one card from their Plot hand.

You may only play this card once per game.

It forces interaction, which is good. I'm not sure I would leave that last sentence in there . . . but I would add "if they have not already done so," after "contribute an action token to either the attack or defense." I might also look for a snappier name.

Play this card any time except during an attack. It requires an Illuminati action.

Place Dead End like a normal group card on a free outgoing control arrow of any group controlled by a rival. That arrow is now blocked and cannot be used to control any groups. The controller of the blocked group may use that group's action, or his Illuminati's action, to move Dead End to any other free outgoing control arrow of any rival group in play. To discard Dead End, all Illuminati must use their actions.

A great idea, but I don't think I would let it be moved around the table. I'm not even sure I'd let it be discarded . . . have to think about that.

"Whatever you do, don't touch that red button!"

Use Reset Button to take back any committed attack. All cards, and action tokens, return to their owners.

I assume that an action can only be taken back if it was initiated by the owner of the Reset Button, and I'd edit the text to make that explicit. Nice power, strong enough to be worth having, not so strong as to unbalance the game.

A CHAIN IS ONLY AS STRONG AS ITS WEAKEST LINK

Use this card to switch the strongest and weakest cards, in terms of current Power, in a rival Illuminati's power structure.

Needs a shorter name and a snappy quote. Also needs to answer the question "what happens if the new shape of the Power Structure does not work or requires overlaps?" My answer would be "the owner of the Power Structure may fix these things by moving cards to new arrows on their masters, but must discard any Groups that cannot be made to fit." But it is evil and annoying and appears to play well.

David also wins a special art prize. He submitted several cards, including two that made the final cut . . . and every one of them had great computer-generated art which included the Secret Feature (no, we won't come out and say what it is) of all INWO cards. The Secret Masters are sending him a set of all 9 Illuminati from the original release, autographed by the guilty parties. 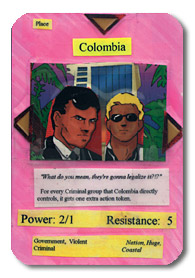 Simple, appropriate, funny power. There are already lots of strong Criminal, Violent and Government groups . . . but since this is a Place, and a low-Power one at that, it does not seem too unbalancing. We'll see a lot of "Colombia controls New York" layouts, and a lot of Atomic Monsters coming after Columbia.

I'd also give its puppet(s) a bonus to resist Disasters in the first place.

"Unite the land, and you unite the people."

Control Nation groups with a total Power of 28. Places that are not Nations count as one point of Power toward this goal. Your Illuminati's Power may not be counted toward this total.

This would need playtesting for balance. The total required may be too high, or perhaps all Places should count with their full Power.

Good for Space decks . . . which is a concept that could use a bit of beefing up. You know, we really need a Space group whose special ability involves bringing out extra Satellite resources. That would have been a natural for NASA, of course. Private Launch Companies, maybe?

GOAL: THERE CAN BE ONLY ONE

Reveal this card when you share a victory. You alone win!

If two or more There Can Be Only One cards are revealed, they are all canceled and the original shared victory stands.

Shangri-La cannot use this card.

Nasty! Making this a Goal, rather than a regular Plot, will keep people from using it too promiscuously.

Play this card at any time except during an attack. Link it to any Personality in play. That Personality loses its action token, if it had one. Its sex is switched. The Personality also gains the Weird alignment.

No Personality can have this card played on them more than once per game. A Science action is required to use this card.

A funny way to harass a foe, or to turn a card Weird at an important time. Or to set Margaret Thatcher up for a "Bimbo at Eleven" attack, for that matter. I'm not sure I see the point of limiting it to once per victim per game . . . if someone wants a second operation, let them! 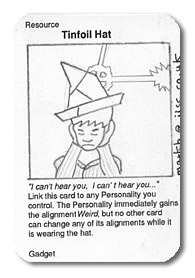 Funny . . . and offering unexpected subtleties of play. Discordia will want some; so will Bermuda.

Perverse idea (an Assassination to which Green groups can add their power) and peculiar sketch.

Basically, this Goal was to get at least 7 Groups and then build a pyramidal house of cards out of them within 20 seconds. Ooooooo-kaaaaay. He had good art, too.

Hopelessly fashionable, Seattle is the home of industry, rock bands — and a lot of coffee. The town never sleeps (probably because of all that coffee).

Play this card with any attack. The power of that attack is increased by the following amount, depending on the date, with an extra +5 if any Church group is involved in the attack:

I can't see actually using it in the game, because people would put a dozen into their decks. Great idea, though.

This is a Disaster-enhancer, which is all we need in the game . . . but the title is so great we may end up including it in the new set anyway. "With the blessing of the Church of Elvis, California is attacked by an Atomic Monster of Biblical proportions . . ."