This article originally appeared in Pyramid #21 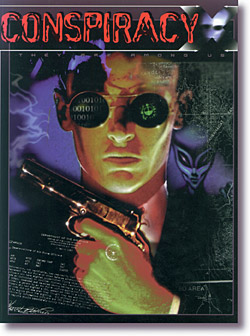 "What is the government really paying for when it shells out 75 bucks for a screwdriver?" This is one of the questions asked by the new RPG system Conspiracy X by New Millennium Entertainment. The answer is (in part at least) your own cell's investigation into the phenomena of psychic power, alien presence and the supernatural. Combining the best of Illuminati and Over The Edge with its own brand of twisted goings on, Conspiracy X provides a richly detailed world for the gamemaster to understand and the players to guess about.

About the only thing the players will understand at the beginning is that their special skills and knowledge have caused them to be recruited into Aegis, a government agency dedicated to protecting National Security (and of course, by extension, the whole human race), by completing the various tasks assigned to them by their superiors within the organization while not getting killed or going insane. If they survive, they may meet or team up with members of the CIA's secret mind-control project, MKULTRA, psychics who can see the future, or even humans with access to extraterrestrial technology. However, given the nature of RPG players and GMs, it's more likely that they will stumble across, and fight with, Aegis' arch-nemesis organization The Black Book, psychics who can set people on fire with a thought, or the Alien visitors . . .