This article originally appeared in Pyramid #4 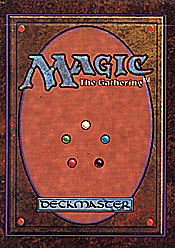 Published by Wizards of the Coast
Designed by Richard Garfield
Price $7.95 (Starter Deck) and $2.45 (Booster Packs)

This might not be the first place you've heard this, but let me repeat it for emphasis: If you are one of the half-dozen or so gamers on this planet who has not managed to pick up a copy of Magic: The Gathering, immediately rectify the situation. Run down to your local game store, and immediately buy a Starter Deck, and maybe a Booster Pack or two (provided they're not sold out). Not only is Magic the best gaming bargain to come down the pike in memory; not only is it the most original idea in years; it's also a delightfully addictive game that you and your friends will find impossible to put down.

The stories are becoming legends: here in Austin, a friend tells me that all constructive work at the University of Texas math department has ground to a halt, because they do nothing but play Magic all day. (There's a certain logic in that, since the game's designer, Richard Garfield, is a PhD. in Mathematics from Pennsylvania.) Game stores can't keep the decks in stock. At conventions, one literally cannot walk 20 feet without tripping over two Magic players sitting on the floor of a hallway. And there are more where those came from.

Magic: The Gathering (minor quibble: I don't get the title. Who's gathering? Where? Just plain ol' Magic works fine for me.) is a card game of a duel between two wizards, each of whom has his own deck of cards. Attacks against the other player can take many forms: you can throw damaging spells directly against the other wizard (each wizard starts the duel with 20 hit points, which must be kept track of), or summon a creature to attack him, or use your sorcery to alter his creatures so that they're no longer effective, or even destroy the lands which supply your opponent with the mana he needs to power his attacks. The possible combinations of creatures, enchantments and other attacks are nearly unlimited.

Magic is based on five different colors of magic (white, red, blue, green and black). Each has its own source of power (mana), and each has its own spells and creatures for you to toss at the other wizard. Each color is opposed by two others, but the oppositions are staggered; of any three colors, at least two will oppose each other. And since you need a lot of mana cards of a particular color to power that color's best spells, many players develop a play deck that is almost exclusively two colors (a one-color deck is a bad idea - while it provides lots of mana for some very powerful spells, all it takes is one or two special cards that protect against that color for an opponent to render you totally harmless). But the debate on strategy rages on, and it's an indication of just how good this game is: nobody's figured out an optimum strategy, and there is no "killer" deck that somebody else's deck can't squash.

And more than just having the right cards, playing them correctly is important, too. Bring out the big guns early and go for the quick win before your opponent gets his defenses up? You might run out of steam before it's over. Pick off every attack as it comes in? It might be better to save those defensive cards for when you really need them, but if you wait too long, it'll be too late. And just because you have a great deck doesn't mean you'll always have a great hand; you can only hold seven cards in your hand at a time, and if you have all mana and no spells to throw with them (or, even more frustrating, a fistful of great spells and no mana to power them), you will find yourself up the proverbial creek in a real hurry.

But Magic: The Gathering is more than just a two-player game. Players are encouraged not to just buy hundreds of cards and cherry-pick a killer deck, but to trade cards with friends: "You still lookin' for Green Mana? I'll trade ya two for a good Black spell." "Well, I got a Scathe Zombies and a Howl From Beyond that I'm not using, but you'll have to come up with a Green spell on your side to even the deal." And so on. And collectors have something to shoot for, too - the cards are gorgeous, with beautiful fantasy art from 25 different artists (in fact, Wizards of the Coast is putting out a special Collector's Edition in December with one of every card, just for the collectors).

There are more expansion sets and games on the horizon, including licensed stand-alone Deckmaster (their name for the system) games for R. Talsorian's Cyberpunk and White Wolf's Vampire: The Masquerade. There'll be more cards, and a magazine, and then more cards . . . it'll never stop. We should be so lucky.