This article originally appeared in Pyramid #23 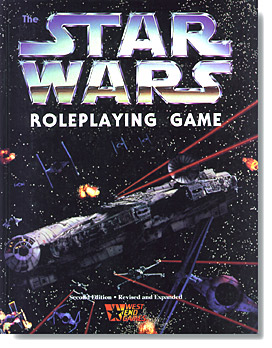 Though I'm sure that the Emperor has foreseen it, and you probably did, too, a

new edition of The Star Wars Roleplaying Game hit the stores recently and the Force is with it. Of course, it's not exactly a new edition. Rather it's the Second Edition, Revised and Expanded. Which brings the next two obvious questions: how is it revised and how is it expanded?

Before going into what's new, let me first briefly explain the game system (I presume everyone is familiar with the premise). Characters have six basic attributes: Dexterity, Perception, Knowledge, Strength, Mechanical, and Technical. Skills are classified under each attribute, and each skill starts at the same level as the controlling attribute, though it can be developed beyond the base score. The attributes and skills are rated by die codes, with average for a player character being 3D (that's 3d6 for those more comfortable with the standard notation).

Task resolution consists of the GM assigning a difficulty (with a lot of help from the game system), ranging from Very Easy to Impossible. For each difficulty level, the GM is given a range of numbers to choose from in setting the difficulty number. Once the number is determined, the player rolls the appropriate number of dice for the skill and compares . . .

Copyright © 1997 by Steve Jackson Games. All rights reserved. Pyramid subscribers are permitted to read this article online, or download it and print out a single hardcopy for personal use. Copying this text to any other online system or BBS, or making more than one hardcopy, is strictly prohibited. So please don't. And if you encounter copies of this article elsewhere on the web, please report it to webmaster@sjgames.com.