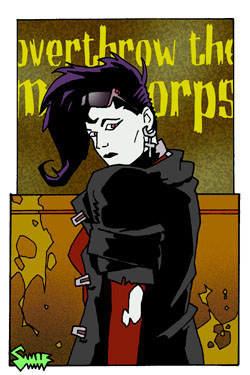 Salleh stands 5'5", and weighs in at 120 lbs. She has ethereal features, with long, thin fingers and a "British-aristocrat" face. Her eyes are a pale pink, and she dyes her hair coal black. Salleh is an uncorrected albino, and her skin is so pale it's almost gray. At game time she is 23 years old, and a 200 point character living in the bad part of a major urban sprawl (TL 8-9 Cyberpunk).

Salleh wears blood-red and black velvet clothes, sunglasses, and a huge black trench-coat with the too-long sleeves rolled up. She commonly caries a cheap slugthrower or two, lockpicks, an assortment of unpleasantly sharp objects, and a cheap phone. She wears a large leather trench coat (DR 1 from neck to shins) and knee-high leather boots (DR 1 feet and shins only).

Quirks: Sleeps during the day, Plays up the vampire schtick, Hates red wine.

Salleh was born to a poor family in an unpleasant neighborhood, and was raised in the society of gangs that sprang up to protect their members from other gangs and thumb their noses at the cops. She quickly rose through the ranks as a ruthless and unpleasant leader, with decent leadership skills and minor contacts in the organized crime area.

Now a minor gang-leader with pretensions, Salleh has adopted a personal style reminiscent of the late-20th-century Goths. Salleh got "into" the goth scene after digging through some old junk in the attic of a building her gang invaded; she found some old photos and clothes, and fell madly in love with the idea of being a vampire look-alike. She dresses the way she does to be different, but mostly because she's very convincing at being a vampire, and this bothers some people. She's started spreading rumors that she's a real honest-to-gosh vampire, but so far most people don't recognize her. This is irritating at best, and on a bad day, she's likely to take it out on the poor schmuck.

Salleh's gang are all ritually disfigured, with big scars on their faces and arms; she's convinced them it's a test of their toughness, but actually she finds it hysterically funny that they'll do that sort of thing to themselves.

She recently blew all the cash from several big hauls on "cyborg"ing herself into a vampire, and has since then began terrorizing her patch with vigor. The more 'wear she gets, the less she cares about normals and the effects of her actions. Her gang is becoming more violent, and more prone to "senseless" actions than their competition, though it is rather small.

The PCs get hired by a small Corp to start gang wars in order to lower real estate costs in an area marked for development; unfortunately they run into Salleh, who protests mightily to anybody meddling in her politics.

Random PC mugging! The characters, wandering through the wrong part of town, become a tempting target and get jumped by Sallehs thugs. If they put up a good, "honest" fight, but lose anyway, they will be offered membership in the gang.

An isolated PC is accosted by the gang, and challenged to one-on-one combat with their "champion" for the right to pass. Surviving is no guarantee, though, as the odds are Salleh will be most displeased with her gang, and insulted by the PC. The character will have earned himself Enemy: Salleh And Her Gang.

CyberHorror: Add Sadism, Bad Reputation, and a Rip-Snake to Salleh, and the whole gang becomes much more violent. Salleh drinks and bathes in human blood, and the gang worships her as a demon on Earth. Residents in their turf are regularly invaded, assaulted, mutilated, and killed. Rumors persist that they're involved in something a little heavier than mere drug- and gun-running . . .

Or: perhaps Salleh is a real, cybernetically modified Vampire. Use stats from GURPS Horror, or GURPS Vampire the Masquerade.