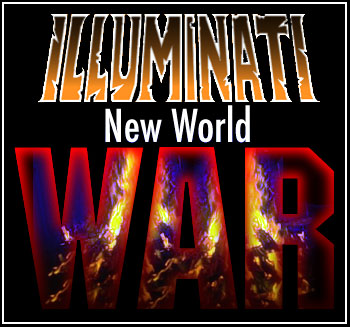 INWO: One With Everything is a good way to introduce players to INWO without making them think about deck construction (yet). But its all-the-cards, all-the-time format can also be a drawback, if you keep drawing cards with very specific targets (like The First Thing We Do, Let's Kill All the Lawyers) or very specific requirements (like Angst) -- something that you don't normally have to worry about in a constructed-deck game (unless you're just really bad at making decks). This variant combines the newbie-friendliness of One With Everything and the harmony of a constructed deck. The Abuses section of the One With Everything rules alludes to this type of variant, but my intentions are good . . .

The idea is simple -- get a set of Group cards with a common theme, and take out the Plot cards that are less likely to be useful with those Groups. In this case, the Groups deck focuses on Nations, making this the New World War as the secret organizations fight for international political power. This will usually be a cold war, but it can get hotter as NWO: World War Three comes and goes.

The Nations cards make up the heart of this deck. Groups that have something to do with Nations (or just fit the international theme) provide support. The Groups deck is made up of:

* From the Assassins! expansion (leave them out if you don't have them -- or substitute some other cards, like Nuclear Power Companies or Robot Sea Monsters).

** From Neue Weltordnung (if you don't have those cards, you can find out what they do in the article "INWO Spricht Deutsch" from Pyramid #16 and use proxies, or just leave them out).

The Plots Deck should start with one of every Plots card you can find, at least from the base set and the Assassins! expansion. Treat NWO: Peace in Our Time as a Yellow NWO card for this game, to provide some counterbalance to NWO: World War Three.

If you have INWO SubGenius, you might consider adding a few cards from there as well, although most of them only work well with the SubGenius groups (some good ones are Miraculous Manifestation, Rant!, The 13th Apostle, Time Control, and Official, Divine, All-Inclusive Excuse).

Then you remove the following cards, since they don't have enough "targets" in the Groups Deck to be useful:

Finally, you can use some of those blank cards to serve as duplicates of the NWO: World War Three card, so that you have one in the deck for each player. Or two per player if you're feeling particularly anti-social. Some of the other blank cards can become: 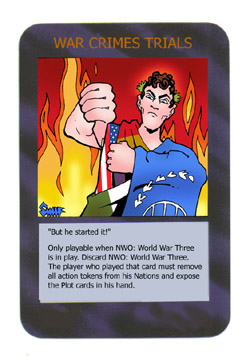 But he started it! 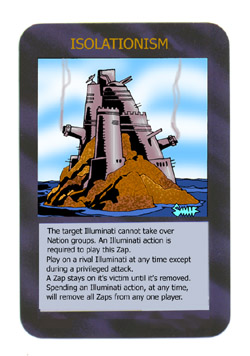 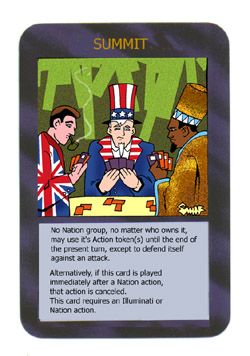 No Nation group, no matter who owns it, may use its Action token(s) until the end of the present turn, except to defend itself against an attack. Alternatively, if this card is played immediately after a Nation action, that action is canceled.
This card requires an Illuminati or Nation action. 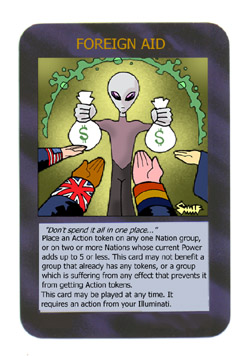 Don't spend it all in one place.

Place an Action token on any one Nation group, or on two or more Nations whose current Power adds up to 5 or less. This card may not benefit a group that already has any tokens, or a group which is suffering from any effect that prevents it from getting Action tokens. This card may be played at any time. It requires an action from your Illuminati. 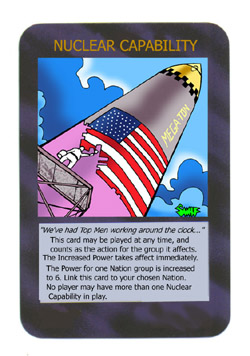 We've had Top Men working around the clock . . .

This card may be played at any time, and counts as the action for the group it affects. The increased Power takes effect immediately. The Power for one Nation group is increased to 6. Link this card to your chosen Nation.
No player may have more than one Nuclear Capability in play.

More Grist for the Mill

That's it -- you're set for a lively game of global thermonuclear war, just like in WarGames. Or you can try it the sophisticated way and win through diplomatic means. Note also that the various Illuminati are not created equal here -- the Adepts, for instance, are not going to find a whole lot of use for their special powers. So make sure everyone knows (or can look through) the decks before selecting their faction.

This is just one example of a themed One With (Not Quite) Everything deck. You could also have Illuminati: New World Paparazzi (Media and Personalities), Illuminati: New-World Politics (U.S. Democrats and Republicans), or Illuminati: Technomancer Order (Science and Magic). If you're into cooperative gaming, throw in just the Peaceful Groups and let everyone play Shangri-La . . . Just so long as you can keep dragging new players into the grip of the conspiracy, They'll be happy.