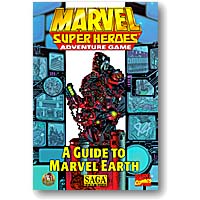 Hold on to your hats, True Believers! Mighty Marvel action is back in the form of TSR's new Marvel Super Heroes Adventure Game. TSR published the first Marvel Super Heroes Roleplaying Game in the 1980s. The new Marvel game is based on TSR's innovative SAGA game system, the same one used for their Dragonlance: Fifth Age game. The game box has a black-and-white Game Book with all the rules and an introductory adventure, a full-color Roster Book with stats for 50 major Marvel heroes and villains, and a full-color deck of cards illustrated with pictures of Marvel characters.

Marvel uses the cards, called the Fate Deck, in place of dice to determine the success of a hero's actions. Each player holds a hand of cards, the number of cards based on the hero's overall experience and ability. The cards come in five suits, one for each of the basic ability scores (Strength, Agility, Intellect and Willpower) and the suit of Doom. Players play cards from their hand whenever their hero attempts an action. The card's value is added to the value of the appropriate power or ability and compared against a difficulty number. Cards of the appropriate suit are considered "trump" cards, and receive a bonus. This simple system is used to resolve nearly all actions in the game. . . .