This article originally appeared in Pyramid #6 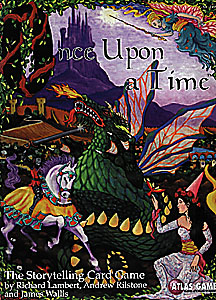 ONCE UPON A TIME

A lot of discussion has gone on in the past few years about the difference between roleplaying games, storytelling games, storyshaping games, and whatever other new term a game publisher can come up with to put distance between his game and all the others on the market. That aside, Once Upon A Time is a true storytelling game in the sense that the average person on the street would understand the word. And not only can that average person understand the terminology, he'll also be able to quickly understand the rules of the game, making this one of the most accessible and fun card games to appear on the gaming scene in a while.

Deceptively simple in design, Once Upon A Time consists of two decks of 2-1/2" x 3-1/2" cards (108 story cards and 36 ending cards) and a four-page rules sheet that has more examples of play than it does rules, all in a large, colorful box. The box that came with my review copy was exceedingly flimsy, but the publishers assured me that a sturdier version was being used for the production version of the game. Not that it mattered much; you can get rid of the box entirely by just rubber-banding the cards and carrying them with you, as you need nothing else (pencils, score pads, dice, timers, counters, whatever) to play.

Playing Once Upon A Time is very simple. Each player is dealt a hand of "Once Upon A Time" cards, each of which is printed with a word or short phrase that is likely to appear or occur in a children's fairy tale (such as "King," "An Argument" or "Two People Fall In Love"), divided into five categories (Characters, Items, Places, Aspects and Events). Most of the story cards are illustrated with a simple woodcut sketch of the described term, but some are picture-less, instead being marked as Interrupt cards, which can be played either using the term printed on them or to interrupt another person's storyline (more on this below) when they play a card in the same category.

In addition, each player receives a "Happy Ever After" card, with a traditional storybook ending ("True Love had broken the enchantment," or "And the flames rose up and destroyed the evil place forever"). The object of the game is for a player to tell a story that uses all the terms on his story cards, playing a card from his hand when he first uses each term, culminating in the use of his ending card. The other players have opportunities to take over the story from the initial Storyteller ("Interrupting") if they have an appropriate Interrupt card or if the Storyteller happens to mention something that is written on one of the interrupting player's cards. The first person to use up all of his cards and arrive at a "logical and satisfactory conclusion" to the ongoing story wins the hand.

While still competitive in the sense that everyone wants to Interrupt and become the Storyteller, there are no rules for scorekeeping, and even those who don't "win" the game will enjoy listening to the unfolding stories; I've even known people to ignore opportunities to Interrupt a Storyteller if the story he is telling is interesting enough.

Beyond that, the rest of the rules serve to provide a framework for play, stating how many cards are dealt to each player, what sort of Interruptions are legal and what aren't, and describing a very few special cases. And in any situation that isn't covered by the rules, a simple majority carries the day. Explaining the game to a newcomer takes less than five minutes, and after a single hand that newcomer would be able to explain the rules as well as any veteran.

Unlike a lot of other gaming that I do, the source material of Once Upon A Time should be familiar to everyone in the English-speaking world (although there are plans for more specialized sets, like High Fantasy, Swashbucklers, and the like, to be released in the future). The rules are simple enough that children and grandparents can all play at the same time, and the game is so engrossing that even people who look down on your roleplaying activities would be willing to join you in a bit of this sort of storytelling. Whether you're buying Once Upon A Time for yourself, or to give to a gaming friend or non-gaming relative, this is one card game which won't sit on a shelf gathering dust.