This article originally appeared in Pyramid #29

Watch closely, the special effects are quite expensive. 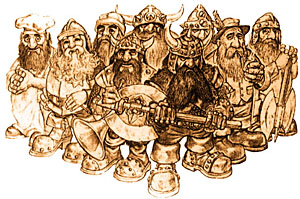 GURPS Discworld is the first licensed-adaptation RPG supplement that I've worked on, and it turned out that the task, rather predictably, is easier in some places and harder in others than other supplement writing. It's made quite a bit easier by the fact that certain crucial work has already been done; the setting not only exists (like that of a historical sourcebook), but it's specifically built to take stories. But there's also a catch; the supplement has to respect the style and nature of its sources.

When those sources consist of no less than 20 novels, which are well known and deservedly loved by a lot of dedicated fans, and when the setting has evolved in subtle and substantial ways over the series - there's only one thing for it. A writer has to turn to his playtesters.

What Are Friends For?

"You ever done this sort of thing before?"
"What sort of thing?"
"Rushed into a temple, killed the prieshts, shtolen the gold and reshcued the girl."
"No, not in so many words."
"You do it like thish."
- Terry Pratchett, in The Light FantasticThis project inevitably attracted some very enthusiastic volunteer playtesters, all of whom richly deserve thanks. I was especially lucky in that John Dallman, a fellow gamer, friend, and hard-working GM, was looking for a new campaign idea to use on his regular group. As a GURPS and Discworld fan, he asked very nicely, and I lent him a copy of the first draft.

He not only tested the thing - he came back with a campaign description that could serve as a useful model for GMs who've just picked up this supplement. I think it deserves to be quoted intact.

"How about playtesting GURPS Discworld?" I said to my Tuesday evening group, as the Feng Shui campaign spin-kicked its way to a confusing end.

"That's OK; if you can cope with Shadowrun, you can handle GURPS And I don't expect that the rules will be hugely important."

"All right," they said, "but we need a vague plot outline. Pratchett characters are fairly well fitted to their stories; the Discworld doesn't have parties of generic adventurers, and it wouldn't feel right if we added some. We need some starting ideas."

They were right, of course. I thought about this for a few days, and stared at the maps, and found one solution to this problem.

The Discworld holds a distorting mirror up to the here-and-now, in terms of its societies and its characters. Let's try doing that, on a smaller scale, to my players. What characteristics do they have that I can exploit?

Well, I have two Welsh computer programmers. They'd be Llamedosian druids; how can we take them out of their normal context? I fancy running the campaign in Ankh-Morpork, so . . . ah, obvious, really. The senior druids of Llamedos, remembering that Ankh-Morpork grew up around the university, and knowing, of course, that any serious concentration of magical power must have some stone circles nearby, will send a couple of expert stone-circle programmers to the city to get the ancient stone circles operating again. Druids don't question their superiors if they have any idea what's good for them, so that's got things started.

So I told the players, and Daffyd and Rhodri decided that they'd play the druids without any real prompting from me. I needed a wizard and a watchman, so that they could have proper contact with the city institutions; an expert city guide/pickpocket came floating out of the crowd, and a witch and her cat wanted to be around. So far, so good. Then the players started fleshing out their characters . . .

You don't expect computer-nerd druids to be very much in touch with the world. However, when one is Overconfident and Impulsive, and the other Indecisive and Gullible, you can tell whose purses are going to get lighter fast. They didn't reckon they needed money, since "druids are entitled to take whatever they want," but the city soon put them right on that front. They were unfailingly confused, leading to heart-stopping moments like the AM$400 restaurant bill in a clip-joint deep in the Shades, taking flowers when they went to see the Patrician ("Patrician? I thought you said 'Patricia.' ") and the introduction of the Llamedos Tea Ceremony ("One lump or two?") to the porters of Unseen University.

(Phil comments: That's a consequence of letting the players see the GURPS Compendia, of course. There's a Tea Ceremony skill on the list, so of course they take it.)

The normal mores of a party of adventurers did not really apply. Their guardsman, a dwarven werebadger (don't ask . . . ) did the job he'd been assigned by the commander of the guard, by keeping them out of the graveyards. The wizard and the guide were just in it for all the money they could con out of the druids and the witch . . . Well, it happened like this.

There were indeed stone circles around Ankh-Morpork, as the Law of Narrative Causality implied. The first one they found was on the Tump, the hill with an old ruined castle on top, on the edge of the city proper. They excavated it, after paying their wizard a lot more for castings of Shape Earth, and managed to get it running. Making bad computer jokes (e.g., The Tump and /tmp) until the GM gives in works well, even on a system so old that "Syntax Error" is a thunderstorm.

Then the witch decided that they were a Bad Thing, and began telling people so. The protest movement developed quite fast, but not fast enough. "Is this circle networked to the next?" asked the druids. Meanwhile, the wizard had chipped a bit off one of their stones, and was trying Seek Earth. They found more stone circles, of increasing complexity, in a variety of awkward places: underneath a lake, holding up the clip-joint they'd run away from, built into the Fools Guild and . . . in the Unreal Estate.

Fools rush in where wizards fear to tread, and in they went. Running a stone circle with that much magical distortion in reality is . . . unwise. There was only a minor incursion from the Dungeon Dimensions, and they only got lightly shouted at by the Archchancellor. They left. They'd been told that if they came back, they'd leave by at least four gates simultaneously. But there are plenty more druids where they came from . . .

There was no combat, but a lot of running away from trolls. There were no tragic moments of kitsch, but there were a lot of players laughing themselves off their chairs. Discworld seems to work for gaming. I'll run some more soon.

"Anywhere" represented a very restricted range of choices compared to the kind of places magic could transport you to.
- Terry Pratchett, in EricOne last thought. The Discworld works as a (fairly) straightforward fantasy game-world as well as a comedy setting; indeed, Discworld comedy is subtle stuff, and as John showed, it's actually better to treat the setting fairly straight, and let humor arise from character and events, rather than playing flat-out for laughs from the first.

Given this, some players might wish to have existing PCs transported to the Disc from previous game-worlds. However, GMs should think twice before permitting this. The Discworld is not a place that sees much traffic with other realities; it has quite enough weirdness of its own. However, there is always a chance that players will really, seriously want the security blanket of a preexisting PC, or that GMs are running "multiversal" campaigns that see PCs crashing from world to world like drunks looking for a bar that will serve them.

Given this, there may be a number of ways of arriving. The following possibilities were suggested by John M. Ford, who did a considerable amount of early work on the book.

Even if one deliberately "transports" in, the nature of the Disc is such that something unexpected is certain to happen on arrival:

Adventurers may be Summoned by a Discworld magic-user in (very) desperate need of assistance. They are likely plucked without warning from whatever world they are currently in. (Or worlds: the "team" might be from across the multiverse, and meet for the first time on arrival.)

Alternatively, the transit spell may be preset, waiting to be activated by the right circumstances. There is usually a Prophecy: "Should the Duchy of Wigginberg ever be threatened by Darkness, a party of Heroes from beyond the sky will come stumbling out of the garden maze, speaking of Critical Failures and Guisarme-Voulges." This is hardcore traditional fantasy. You can bet that the Disc will warp it.

Or the spell-caster visits the PCs, recruits them (promising fame, honor, and large sums of money), then leads them back through a portal. If he's smart enough to cast such a spell, he probably won't tell them in advance where the mission is to take place.

People exploring occult libraries may accidentally enter L-space and emerge on the Disc. Unseen University is the obvious point of arrival, but they could come out at any library. They might only be able to return home through the University Library, and then the assistance of the Librarian would be necessary.

And last of all, there are a number of Wandering Shops in the multiverse. These should be familiar to anyone who knows their fantasy; they appear unpredictably, and not only shut down before customers can take their purchases back for a refund (preferably of their sanity), but actually disappear, leaving a blank wall. They do not usually carry people (they are in retail, not public transport) but anything is possible.

I just hope that some of them are selling GURPS Discworld . . .