This article originally appeared in Pyramid #8 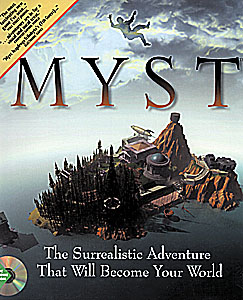 Published by Cyan
Distributed by Brøderbund
Written by Marc Miller and Robin Miller
For Mac and PCs with CD-ROMs
Retail Price $49.95

The term "photorealistic" has become a buzzword lately to refer to certain CD-ROM games. Most of these games that claim photorealism, like The Journeyman Project and Iron Helix, are actually just composed of very nicely rendered 3-D images -- beautiful images, in fact. But they do not look like photographs.

Which is why Myst signals the next generation of CD-ROM games. It is true photorealism -- some of the images are so good that without close examination, I might be fooled into thinking they were photos. From the beginning of the game to its unique and unexpected finish, the player is treated to one gorgeous scene after another. Frankly, I ceased being astonished about halfway through and switched to an adolescent anticipation of the next wonderful image.

Which isn't to say that beautiful images are all Myst has going for it. It's also one hell of a game. It uses an extremely simple and user-friendly interface, which is to say, no interface at all. You are presented with a scene and a little hand icon. You put the hand where you want to go, or what you want to examine, and voila! There you are. This "invisible" interface merely adds to the feeling of "being there" that the realistic scenes already create.

The plot of the game is very complex and requires many hours of exploration and experimentation to figure out. Basically, you are transported by a mystical book to the fog-shrouded island of Myst. You are given no directions, no long background to read. You're just there, standing on an abandoned dock, looking up into the trees and listening to the sound of the water lapping gently against the shore (oh, did I mention that the digitized sounds are also incredible -- play this with headphones!).

Of course, if the graphics and sounds weren't so spectacular, such puzzles would eventually become tedious. If you don't like intellectual puzzles, this game probably isn't for you (though you might enjoy watching a friend play). But the puzzles are there to lead you through the intricate plot, which involves a magician/philosopher named Atrius and his two sons, one of which has betrayed him and locked him away in one of the mystical lands, called "Ages," he created within the pages of his book. Before he was banished, Atrius was able to set a trap for the brothers, two other books, colored red and blue, that hold the brothers hostage in unique, solitaire prison Ages.

Throughout the game, you must travel to four of Atruis' designer worlds to collect pages of the two books, red or blue, and each new page added to the books allows that son to come closer to escaping. Of course, each brother claims the other is the one who betrayed his father. Each prods you to continue onto the next Age and retrieve more pages for his book. The Ages are hard to describe, but each has its own defining characteristic (swamp land, desolate rock with gears and strange machines, etc.) Each Age also requires you to figure out how to get back to the island of Myst before you can continue. Some of the Ages are easy to leave, while others will drive you mad before you kick yourself for not figuring the solution out earlier.

The plot ends when all the Ages have been explored, and at least one page brought back from each one. I won't spoil the ending for you, but suffice it to say that it involves taking a huge risk and some highly intuitive thinking. Save your game often.

Unfortunately, the very things that make Myst a really good game are also at the root of its flaws. The interface is easy to use and invisible, but it has little depth. There is very little you can do but look at things, turn cranks, press buttons and so on. There is almost no interaction with other characters and only a few things that you can actually pick up. Players who are used to "adventure" style games, with heavy action, inventories and lots of interaction with other characters in the story will not find that sort of thing in Myst.

Also, I found it difficult to tell which objects depicted in a scene were simply there for decoration and ambiance, and which ones were able to be examined, searched or used. This can be highly frustrating, and makes the game move much more slowly. Another, less-frustrating problem is that there is only one solution. No matter how many times you play the game, the choices you make will ultimately be the same. True, you can explore the Ages in whatever order you want, but each puzzle's solution is the same each time. Perhaps the creators of the game will change this if they produce the rumored Myst II.

Ultimately, Myst is an extremely satisfying experience. It is the first adventure game in which I left feeling as though I had visited a real place. I have fairly vivid memories of many of the buildings and Ages. The creators of this game put a huge amount of effort and time into making the scenes as real and as memorable as possible. They have succeeded for me, and I suspect for anyone else who plays this game.