This article originally appeared in Pyramid #8

Normally, I start a review off slowly. Introduce the product, mention a few things about what the designer was trying to accomplish, discuss the good and bad points, and then build toward the final recommendation.

Forget that noise. I'll cut to the chase -- Planescape is the finest game world ever produced for Advanced Dungeons & Dragons. Period.

For most of us over-30, played-D&D-back-when-it-was-three-books-in-a-box gamers, it's been fashionable to turn our noses up at AD&D. Oh, it's fine for kids, we'd say smugly, and it's a great place to start since everybody knows it, but we're much too sophisticated for those simple pleasures anymore. We've moved past AD&D in favor of more realistic rules, or a darker tone, or maybe just because we decided the game we started with wasn't cool anymore. We've evolved.

Planescape is everything us cool, jaded, disaffected gamers always complained that AD&D was not -- sophisticated, almost adult, roleplaying. And not adult in the sex-and-violence sense of the word. Adult in the sense that there's more going on than just "kick open the door, kill the monster, take the treasure, repeat." Adult in a sophisticated graphic look that's unlike anything I've ever seen anywhere. And adult in the sense that it makes you think, and might even challenge your most basic ideas about life, the universe, and everything.

Planescape is about the various planes of existence in the AD&D world. First comes the Prime Material Plane, where the rest of the AD&D game worlds reside. Then there's the Astral and Ethereal Planes, which connect the Prime Material Plane to the Outer and Inner Planes, respectively. The Inner Planes include the six dominant Elemental Planes (Fire, Air, Water, Earth, Positive Energy and Negative Energy) and the various Paraelemental and Quasielemental planes where various combinations of the first six meet. Between Earth and Water, for example, is the Paraelemental Plane of Ooze; between Positive Energy and Air is the Quasielemental Plane of Lightning; and so on. The Outer Planes are 16 realms ruled by various Powers, and are where the spirits of most mortals go after their demise. Outer Planes include The Abyss (for the chaotic evil), Arborea (where the human gods of Olympus dwell), Ysgard (where the Norse gods hang out), and so on. There's also the Outlands, a plane that connects the Outer Planes to Sigil, the center of it all. Sigil is a strange city with doors to every plane and every reality, and inhabitants from all those planes and realities living together in (more or less) harmony. 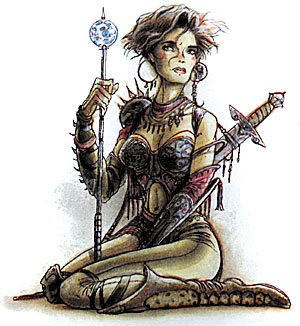 Sigil is rife with philosophical factions, all with their own take on how the universe works and what it's all about. So live and let live, right? Not so fast. Out among the planes, if the inhabitants of a particular town begin to believe in the philosophy of another plane, their town physically moves to that plane. Each faction is continuously struggling to gain converts from other factions and to hang on to what they've got. Because the more people who believe the basic laws of the universe work a certain way, the more the universe tends to work in just that way. Alignment and philosophy are more than roleplaying tools -- they're the main point. Designer Zeb Cook's three-word summary of the Planescape experience is, "Philosophers With Clubs."

The writing throughout Planescape is wonderful. The writer is an old hand at the ways of the planes, and the books are written directly to the reader. The tone is extremely conversational, and filled with the extensive slang that Sigil natives use every day. Newcomers from the Prime Material Plane, who have no idea what's going on, are "the clueless." A "bone-box" is a mouth, as in, "Stop rattling your bone-box." To "give 'em the laugh" is to escape from someone's clutches. The game encourages the DM to speak in this slang as much as possible, and to convince the players to do it, too, to enhance an already rich roleplaying experience.

As is usual with TSR products, you get a ton of stuff for your money. You get four books totalling 224 pages, four full-color maps, and a DM screen. And the look! Planescape has got one of the most distinctive graphic looks I've seen in any game product, ever. It's a real departure for TSR, whose graphics have already been top-notch, extremely professional, almost elegant -- this is a real quantum leap.

From the weathered-metal texture of the book covers to the bizarre headline typeface to the odd squiggles of brown and blue that are on nearly every page, this product looks different. It's a wonderful continuation of the theme already established in the text -- you know that this is no typical AD&D product the minute you open the book.

Another key to this look is the art, unusual drawings that remind me a little of Dr. Seuss (if he did highly-detailed dark fantasy) and a little of... well, I don't know what else. Tony DiTerlizzi has done an outstanding job, and I hope he continues to illustrate future Dreamscape releases.

There's lots more, too. One book is nothing but new monsters that dwell on the planes (including the once-silly Modrons, rescued from an old 1st Edition AD&D hardback and given a new background and purpose that makes a lot more sense). The DM screen is invaluable, with all the important tables that you'll need, including the ones most important to plane-travelling parties.

There's a few new rules to keep the munchkins happy, too. Different schools of magic operate differently on the various planes -- some spells will be enhanced, others altered, and still others simply won't work on the wrong plane. And magic items are affected, too.

Even magic weapons and armor become less effective as they stray farther away from the plane on which they were created. It can be a lot to keep track of, especially if a plane-travelling character has a horde of magical goodies acquired at various stops along the way. "OK, we're in Ysgard, so my armor from the Prime Material is only +1, and my sword that I got on Air is +3, and if I throw an Alteration spell, it will, um..." The rules guys will eat this stuff up, and people who are prone to ignore those parts of the game that they don't like (and you know who you are) can ignore these things totally guilt-free.

At some point in the review you're supposed to mention a couple of bad things about the product, just to prove you're not biased or something. Well, I don't think I can do it, unless you want to count my complaint that they actually put a few new rules in the box.

Planescape is a revolutionary product, a breakthrough for TSR. If you think you've "graduated" from AD&D, that you've evolved past it, go back and take a look at Planescape. This is the game world that will get you playing AD&D again.

Perhaps you've glanced at that little credit on the contents page of Pyramid that says "Print Buying" and wondered who Andrew Hartsock is. I'm the guy most directly responsible for getting all of Steve Jackson Games' products printed. I interact on a daily basis with numerous different printers. When we do a product that requires assembly, like a boxed game or game supplement, I help coordinate the whole mess. Or I try to. Its also a fact that you probably don't care, but I don't really want to talk about my job anyway. I want to talk about TSR's Planescape, from the perspective of someone who has such things printed.

Planescape is really, really cool. Don't get me wrong, I haven't read it. I scammed a review copy from the TSR booth at GAMA and quickly handed it to a friend of mine who occasionally runs an AD&D campaign. Sure, I sorted through its contents; I admired the beautiful graphics and the sheer quantity of stuff. But I didn't want to ruin any of its surprises. I wanted to play in it.

So no, I didn't read it. But I'll tell you something: when you buy Planescape, you get a lot for your thirty bucks. When I do the purchasing for a product, I have to take a lot of things into account. I have to figure the unit cost of each individual piece. I have to take the sum of all of the little pieces and get one great big cost for the product. Then the number crunchers figure how much has to be paid to the artists, how much has to be paid to the designers, how much to the editors, and on and on. We sell the product to distributors, who sell it to stores, who sell it to you. Somewhere in there, our company is supposed to make some money.

I really have no idea how they can sell as much stuff as is included in Planescape for thirty dollars. It includes, in no particular order: a DM screen (full color on one side, two color on the other--not cheap), four(!) books (full color covers, interiors on two books full color, the other two are two-color. Nice paper. Inexpensive? Yeah, right), and four(!) jumbo-size maps (with color!). In short, a heap of high-cost printing. I haven't even mentioned the box, which yes, costs money too, or the shrinkwrapping, or the fact that someone has to get paid to cram it all together.

Now, had someone brought this project in to me and said "Hey, here's a little something, we'd like to retail it for $30", I would have had a good, hard laugh. Short of making a pact with the devil (which I've considered -- Derek Pearcy has his phone number), I couldn't pull off the print buying for it. And I'm good at my job.

So hat's off to TSR. They've put out a darn good product in Planescape; one that I can't wait to play in.