This article originally appeared in Pyramid #1

Of Martians And McCarthy

I've always been surprised that no one has ever brought a Fifties sci-fi game on to the roleplaying market. After a late-night viewing of Them! when going to school, I decided to write a Fifties roleplaying game. It had many of the elements later used to create Atomic Horror, in particular the Krel and the Theoretical Science Foundation but, distracted as I was by other things -- exams, other campaigns and the like -- and only the bare bones had been laid down and playtested. 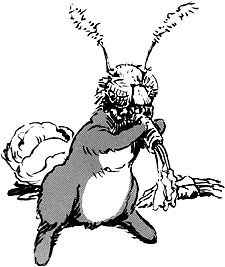 When SJ Games asked me if I had any ideas for a new worldbook, the Fifties sci-fi game came to mind. Initially, the game was intended to encapsulate everything from that genre: giant insects, coliding planets and alien invasions, as well as a host of other concepts. This seemed to work quite well, but I discovered early on that one film, Earth vs. the Flying Soucers, had been based on a UFO book by researcher Donald Keyhoe. It seemed as it several movies had been influenced by books of this nature. I'm convinced that the alien encountered by George Adamski served as the model for the Metalunans in This Island Earth.

UFO literature unearthed a whole new world of possibilities, rationales and pieces of evidence. Unidentified Flying Objects have, at some stage, been connected with almost every mystery going! Loch Ness, Atlantis, the Bermuda Triangle, the Tungusta explosion and hundreds of other unexplained phenomena have been connected to the crockery from the void. Most links are quite tenuous -- like the existance of the saucers themselves -- but it all made excellent background! It meant that the aliens who flew to Earth, in my game, would be involved in many different activities, from kidnapping housewives to cattle mutilation to infiltrating Congress.

The greatest problem in creating the background for Atomic Horror was deciding why these aliens were coming to Earth, but not landing. Or why UFOs had been sighted down the ages, but only decided to invade in the 1950's! Of half-a-dozen theories, I tried to incorporate the best by assuming there were several alien races; some came here to explore, some from our future, others to invade or abduct. This way, the GM could get his money's worth out of a flying saucer theme. Preventing an invasion or wiping out an alien race entirely won't be an end to the player's problems . . .

Whether you take Erich con Daniken's theories seriously or not, some of his ideas made a perfect secret history for the human race. This allows the GM to mix archeology and myth, with invasion and manipulation of human evolution. It also helped explain things like Atlantis and the sudden end of the Ice Age.

An important part of the book is the Theoretical Science Foundation. Most of the movies I watched had heroes caught up in the action by chance. They were one time events. Here, there needed to be a reason to get involved in bizarre occurrances more than once. The TSF is the answer. It keeps teams together and provides replacements for PC casualties. It is a scenario machine, sending the characters on expeditions and research trips.

My two groups of playtesters had different approaches, however. One team was happy with the TSF, the other wanted more physical danger and gunplay. To cater to this group, I introduced a tougher version of the TSF: the FBI and its Scientific Advisory Agency. Although such firepower made them feel mroe confident in their abilities and safer from harm, it was only an illusion.

You may wish to use the TSF as an antagonist, instead. In fact, many of the mysteries and the organizations are given several explanations and rationales. This means the GM gets maximum playability out of the background, in a similar way to the UFO-invasion phenomenon. It also means that he can still surprise players who've read the book!

From the beginning, it was important that players could do almost anything, at least in scientific terms. Most of the monsters and technological effects can be explained away as superscience. Excepting the rare, unnatural weakness, like a sad level of resistance to the common cold, if the players can't use this fantasy science, then how can they defeat the menace?

So rules are provided for the design of rocket missions to the planets -- not historically accurate, but true to the atmosphere of the movies. The genre often featured the design of some new piece of technology for good or evil; the PCs can create them, too. It's up to the GM to regulate this.

UFO theories and conspiracy theories ofteh go hand in hand. If there's a mystery, then someone is abviously covering it up. Popular thought has it that the government know the truth about UFOs, but declines to tell the public.

This paranoia is great for a roleplaying game. It was originally fueled by the Cold War, America and Russia locked in deadly stalemate across the globe.

Those days are gone, and Atomic Horror can no longer be said to be a modern-day game setting. In keeping with the Fifties Communist scares, Atomic Horror is riddled with secret agents, foriegn spies and cover organizations, alien invasion threats and shadowy intelligence agancies. Throughout, the motto is Fear is the Unknown! When players can't tell who or what is attacking them, or even perhaps why or how, they get scared. What more could the typical horror GM want?