In addition to providing a dozen alternate Earths to enthrall players and assist GMs, GURPS Alternate Earths and GURPS Alternate Earths 2 give the would-be parallel designer a dozen finished examples to inspire and inform her own work. On pp. AE8-10, we discuss some general principles and elements of world design; in the two sourcebooks we display a dozen finished products. Between those two steps lies the hard work of design and decision; in this article we go behind the curtain and show how we did it the second time around. 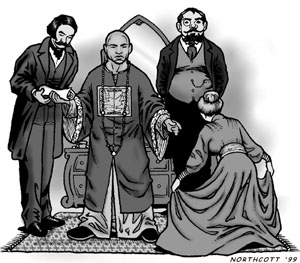 Three of the worlds (Cornwallis, Aeolus, and Ming-3) spring from the Reality Seeds on pp. AE9-10, which themselves spring either from chapters left out of the first book for space reasons or from worlds cut from our first proposal. (We cannibalized one of them, Aphrika, into the African geopolitics of Ezcalli in GURPS Alternate Earths and then added it as a Reality Seed on p. AET10. Waste not, want not.) Given the positive reception to the first volume, we decided to replicate its structure. We already had the "repressive world" (Reich-5 in AE, Cornwallis in AET), "Romantic world" (Dixie in AE, Aeolus in AET), and "ancient empire world" (Roma Aeterna in AE, Ming-3 in AET). Centrum (from GURPS Time Travel) became our "harsh scientific utopia" replacing Gernsback, leaving us needing analogues for Shikaku-Mon (the "SF" world) and Ezcalli (the "fantasy" world).

Caliph comes from our desire to include a genuinely advanced, but not incomprehensible, science-fiction setting. This meant finding an earlier scientific-industrial revolution -- we rejected the Greeks because we'd done classicism in Roma Aeterna. The Islamic Golden Age offers a rather better chance at science and industry, and the Arabian Nights is a convenient source for imagery that blends with SF's "sense of wonder." Displacing our history created Caliph's, though their modern era was less stressful. Later events were built by progressing society through GURPS Tech Levels at nearly 20th-century speed. A basically decent if self- satisfied culture fits the tone of the Arabian Nights -- no social criticism there -- and introducing wrenching change into such a world is an SF staple. The war is the (sample) disruption built into the setting, and keeps the focus on Earth as page limits require. It also makes the timeline difficult for outtimers to loot.

Midgard became the swords-and-sorcery world, which meant, of course, Vikings and lots of 'em. This was a straightforward Strengthening the Marginal exercise; supercharge the Vikings enough at the start, and the destruction of the West is relatively easy and plausible. Buy the premise, and you buy the bit. The only decision lay in where to stop. Simple population extrapolation for Vinland, the anti-gun prejudices of the genre, and the coolness factor of having Vikings vs. Cheng Ho all led us to the early 15th century. The rest of the world we built by thinking like Robert E. Howard: what's the most exciting, weird, pulse-pounding thing we can plausibly stick in here? So you get Apaches, human-sacrificing Mixtecs, Moorish Spain, Mamelukes, and the Golden Road to Samarkand. All of which actually existed in our history in 1412, making things even easier. The hardest part became advancing history past Tamerlane, but the "strong Mongol" parallel with Ezcalli seemed distracting. 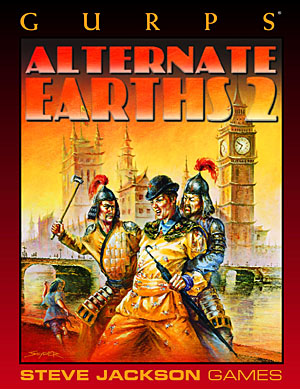 Especially since we designed Aeolus and Cornwallis as sort of a Greek Chorus, parallel revolutions against the same corrupt ancien regime. Aeolus grew out of the first complete alternate history the authors did together, and was thus arguably the seed for both GURPS Alternate Earths supplements. The changepoint was a happy confluence of an incident amenable to weather control (Aeolus began as a Champions setting) and two authors' then-recent completion of a course on 17th century England. As all alternate historians -- and other writers -- know, you take your inspiration where you find it. We developed the world's history in a more organic manner than many of our other worlds, asking "What happens next?" after each event rather than aiming at a particular theme or goal. Regardless, since we designed it in the heady days of fall, 1989, a liberated Eastern Europe seemed predestined. (One touch we tried in Aeolus: repeatedly reminding ourselves "It's been too long since something unlikely happened. What's a plausible surprise?") Cornwallis, meanwhile, took the French Revolution rather than the American as its parallel. We designed Cornwallis first as an alternate intellectual history where the reactionaries won, "progress" became identified with the state anyway, and toadies like Hegel justified it as inevitable. This world unfolded easily, if depressingly, from the assumptions of Malthus and his contemporaries. Then we added a revolution even worse than its opponents; if Aeolus is Tom Paine, Cornwallis is Edmund Burke.

Ming-3 began with our imagining China's place in East Asian civilization being replicated on a global scale. The voyages of Cheng Ho are familiar to many fans of history and alternate history, and served as an obvious point of departure. (Though one discovery we made is how difficult it is to extend Chinese maritime interest beyond the Indian Ocean.) Ming-3 let us look at different cultural assumptions about industry: why, we wondered, would the Chinese invent labor-saving devices? As a counterpoint to Roma Aeterna's confident "upswing," we put Ming-3 on the downswing as the Mandate of Heaven frays. A globe-spanning realm in decline, perhaps a knife's edge away from its final crisis, seemed a natural setting for (paralleling Cornwallis) the struggle to protect even a corrupt civilization (when the alternative is barbarism), or of course pulpish wuxia adventure in the weak, divided, ineffectual dying empire.

Centrum was a challenge to design organically from the few hints given in GURPS Time Travel. As a kind of Dark Gernsback campaign villain, players who begin with just those hints can grow to understand Centrum's viewpoint, and perhaps even find some of their qualities admirable, without ever doubting that they are the enemy. (We'd built Pure Evil in Reich-5, for fans of more Manichean gaming.) Centrum's history gives them both a motive for imperialism and an exaggerated respect for its potential. It also gives them cultural blind spots that canny agents of Infinity, Inc. should be able to exploit. Centrum's perspective on paratime activity, without a Prime Directive or even much concern for secrecy, could also be adapted for a campaign based around a more sympathetic group.