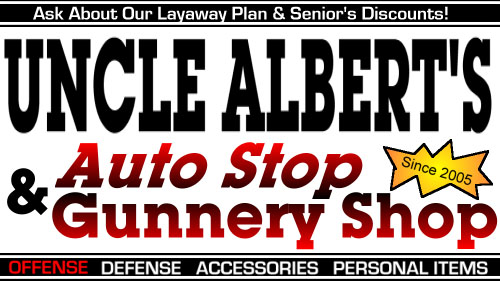 You've heard the rumors - at the 2047 Christmas Bloodletting in Lawton, Oklahoma, the first civilian use of practical sonic firepower screamed out into the tabloid nets. According to the reports, the Oklahoma National Guard had outfitted the duellists (both off-duty soldiers) with the guns as a holiday lark. Within two months, the denials ended and the guns went public - if you happened to be an Oklahoma citizen.

No more waiting! Uncle Albert's Has Sonic Cannon! They're available now in the United States, Texas, and most parishes in the Republic of Louisiana! Better strap on your earplugs, campers, 'cause Uncle Al knows that these little screamers will be tearing up the duelling circuit this fall! Warning: Uncle Albert is not responsible for incidental damage to hearing, digestion, and delicate dental-work as a result of close proximity to sonic cannon-fire. We know our customers are responsible adults who put safety first in their deathsports and personal-defense planning.

Sonic Cannon are energy weapons, projecting focused sound to damage their target. This makes for an accurate and powerful attack with little relative expense. Unfortunately, the destructive power of the beam degenerates rapidly with range.

SC damage breakdown works on the same four-inch scale as targeting modifiers. Within four inches, an SC does double the rolled damage. From four to eight is normal damage, from eight to twelve is half the damage rolled, from twelve to sixteen is one-fourth the damage rolled, and so on, halving for each further four inches and rounding down.

Beyond 8 inches, SC fire is all but useless when compared to weapons in the same price, weight, and space range. Within 4 inches, the sonic can rule the battle. As with rockets, effective use of the Sonic Cannon can depend more on the skill of the driver than the skill of the gunner.

Unlike lasers, sonics are not blocked by smoke or paint. They remove metal armor as if they were burst-effect weapons. In addition, any pedestrian or exposed crewman hit for at least one point of damage by a sonic cannon (even if the damage is absorbed by body armor), must roll 1 die. On a 5 or 6, he is affected as if by a Concussion Grenade! Mechanic rolls for Sonics are the same difficulty as Lasers. 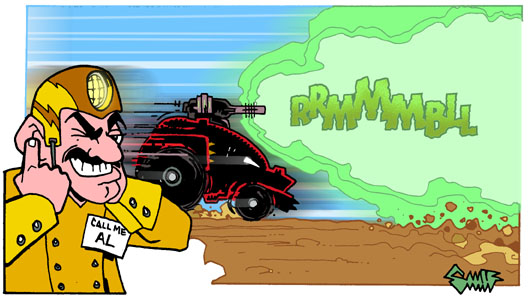 Tight-Beam Modifications (TBM) - May be applied to any Sonic Cannon, doubling the price of the weapon. Sonics with tight-beam modifications have their damage halved at increments of eight inches instead of four. Power consumption is doubled. This brings the effective range of the SC to within the sphere of most vehicular combats.

Sonics Underwater - Sonic Cannon are useful underwater weapons (and are available in waterproof versions at the standard 25% price-hike). When fired underwater, Sonic Cannon are treated as if they had Tight-Beam Mods at no extra cost! Those with TBM have partial additional effect - damage is halved at increments of 12 inches. Unfortunately, sonic fire is less accurate underwater - subtract 1 from all "to-hit" rolls.

These are low-tech versions of what will later become screamer weapons, firing a wider but more diffuse sonic pulse. Their short range limits their military utility, but bloody-minded regimes use them for "street clearing" riot control operations where their terrifying effects on exposed flesh are an effective "deterrent" to activism. Combat engineers find them useful as an alternative to bulldozer blades or demolition guns for destroying bunkers and barricades (and any enemy troops hiding in them).

Damage: Sonic cannon have the same special effects as GURPS Vehicles screamers -- see p. VE197. Even if no damage penetrates DR, GMs can require a HT roll to avoid being stunned: add +1 per 5 DR of sealed armor and subtract 1 for every 6d damage (modified by range increment). Failure means the user is stunned for one turn times amount failed by.

Range: Sonic cannon have a special 1/2D range: damage is halved at 20 yards range and halved again every 20 yards after that. They have no maximum range per se. Acc does not drop to zero beyond 1/2D range. Double these increments if cannon has tight-beam modifications or is fired underwater (assuming its designed for such usage), triple increment if both applies.

Here's how to build sonic cannon using GURPS Vehicles. Note that in the Autoduel universe, no SC weaponry with an output lower than 160 kJ are currently feasible. The largest known Sonic Cannon was built for the Republic of Oklahoma's armed forces, and had an output of 1,400 kJ.

Here's how the weapons game out as GURPS Autoduel designs: