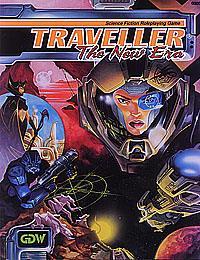 Traveller was, along with Melee and D&D, one of the first roleplaying systems I played. It wasn't the first SF RPG, but it was the first great SF RPG. In many ways, the original Traveller was the game that taught me that there was more to game design and roleplaying than mindless wish fulfillment. In an era when "roleplaying" mostly meant going down into a hole and stealing whatever you could grab there, Traveller always had a scope, depth and complexity that put other games to shame.

Now GDW has published Traveller: The New Era, the third incarnation of the original classic, which takes on the daunting task of bringing Traveller into the '90s, while still keeping the game recognizable as the classic from the '70s.

Most GURPS players will find this very weird, but my favorite part of the original Traveller was always character creation. I admit it, I've always been a closet random-character junky. Part of me - the roleplayer part - really likes the way point-based systems allow me to define and build any character I can visualize, but another part - and I suspect that this is the real gamer part - likes to abandon my fate to the dice, and make the most I can out of whatever they give me. In a good random-creation system, rolling a character can be almost as much fun as playing the game.

Traveller's career-based rules are among the most rational and playable systems for random character creation. You can watch your character grow and develop along interesting, logical lines throughout the process, then take him in whatever direction you wish once the actual roleplaying starts. Traveller character generation not only tells you what your character can do, but where he came from and why he's here.

Rolling a character in Traveller: The New Era is still lots of fun. Of course, a lot of changes have been made - the player gets a lot more choices than he did 15 years ago, and there are more safeguards against useless characters, and unlike the original Traveller, it's no longer possible to die during character generation. But in general, creating a character remains just as much fun as ever.

The new edition still has almost everything else that made the original Traveller special - detailed, playable rules for ground and space combat; realistic systems for generating alien worlds and the creatures that inhabit them; complete and interesting equipment lists. The only thing I missed was a version of Traveller's traditionally-excellent starship design rules. I imagine a separate starship book is on the way, and that's fine, but I would have preferred seeing stripped-down starship creation rules, rather than the two adventures included here.

The biggest change between this edition and its predecessors is a dramatic and effective shift in the campaign background. Traveller: The New Era is set about 70 years after a major galactic disaster, in the form of a sentient and rapacious computer virus. Since almost all technology in the Traveller universe is computerized, Virus (as it's universally known) effectively destroyed civilization everywhere it spread. Now, seven decades later, most strains of Virus have mutated into less-lethal (but still dangerous) forms, and human society is beginning to pull itself together and reach again for the stars.

The whole Virus concept makes the Traveller universe a much more mysterious, hostile and generally entertaining place than it was in prior incarnations.

The physical rules are an impressive package. Behind the eye-popping John Zeleznik cover painting, you get almost 400 rules-packed pages for a very reasonable $25. Interior art is low-key but effective. If the binding holds up under use, this book will be an notable roleplaying value.

I do have a few problems with the game as it stands. I don't mind that the designers left out the cliched "What is Roleplaying" chapter from this rulebook, but they might have gone a little too far in the other direction. They seem to assume that everyone who picks up The New Era already knows, at least in general, what Traveller's all about. The book could use some sort of general introduction - just a couple of pages - giving, in the most general terms, the basic philosophy and history of Traveller, the scope of the game, the nature of PCs, and the fundamental rule assumptions and die-rolling conventions.

Another peeve; the original Traveller could be played entirely with two six-sided dice. The system was grainy, but had an undeniable elegance. The New Era uses polyhedrals, which is fine, but the extra dice are not smoothly integrated into the rules - they tend to pop up at seemingly random and arbitrary intervals, just when you least expect them. At one point in character generation the rules ask for a d15, achieved by rolling a d20 and ignoring anything over 15 - this is simply one of the ugliest game mechanics I've ever run across. There must have been a better way. Polyhedral dice should have either been a much more integral part of the system, or left out entirely.

Finally, I find it starkly unbelievable that any science fiction game published in the '90s would not have some provision for nonhuman PCs. Hopefully, like starships, this gaping hole in the rules will be filled by supplemental material. But also like starships, some room should have been made for it in this book.

But enough carping. Traveller's still around and that's good. I hope it always will be.