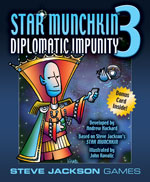 After far too long, your favorite space-faring munchkins are BACK! This expansion includes Ships your characters can use to explore the cosmos; a new Class, Ambassador, that can commandeer Ships from other players; and a new Race, Veggie, because even munchkins need fiber. Plus plenty of new monsters, Traps, and Treasures. (Yes, of course there are more Lasers. PEW PEW!)

Star Munchkin 3 – Diplomatic Impunity . . . in space, no one can hear you squee!

Grab your laser sword. Fight every cyborg and alien you meet. Stab your rivals in the back and steal their stuff. Take the loot and run!

Star Munchkin Deluxe is the Star Munchkin you know and love, but with a board and standies for even better door-kicking action! 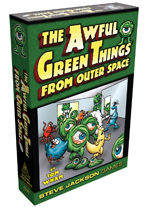 The crew of the exploration ship Znutar just wanted to cruise around the Galaxy, discovering strange new worlds and playing pool. But then their ship was invaded by the Awful Green Things . . . and suddenly they were fighting for their lives!

In this wacky two-player game, one player controls the Awful Green Things. They grow and multiply every turn – especially if they can gobble up a crew member! The other player commands the crew, frantically trying weapon after weapon (pool sticks, fire extinguishers, cans of Zgwortz) to find something that kills the monsters.

This classic game by Tom Wham first appeared in Dragon Magazine in 1980, and has been a fan favorite ever since! This edition includes Tom's "Outside the Znutar" rules and counters, for going out the airlocks and fighting on the surface of the ship, and upgraded components: a mounted gameboard, heavy die-cut counters, and a full-color rulebook! 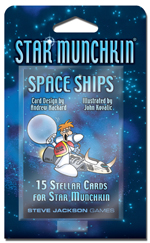 Munchkin Booty introduced Ships to the world of Munchkin. You guys immediately asked why we didn't have Ships for Star Munchkin as well. So now we do!

Star Munchkin: Space Ships lets you ride in -- or on -- the Horsefly, the Starfurry, or the USS Secondprize. You can buff your ships with a Quad-Mounted Laser or a Bridge. And you can let your new Sidekick, Otto, do the flying for you.

Note: This is an expansion for Star Munchkin, not a stand-alone set. Space Ships is not collectible or randomized; every pack is the same as every other. 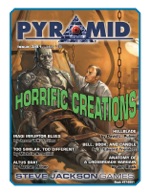 Ghoulish things come in small packages. They can also emerge from vats . . . or lurk at crossroads, awaiting the curious. This month's Pyramid -- the PDF magazine for roleplayers -- checks out the tangibly terrifying, for a suitably scary assortment of situations. Its frightening features include:

This issue also provides a Random Thought Table that explores how to make your own horrific creations. No matter whether you seek a taste of terror to add to an otherwise normal campaign, or you're running a full-fledged fright-fest, you'll get more than you bargained for with this Pyramid! GURPS Social Engineering: Back to School

You Have a Lot to Learn

GURPS is one of the rare few RPGs that lets characters improve between adventures as well as from them. The challenge is in making study interesting -- perhaps even an adventure in itself. GURPS Social Engineering: Back to School is the ideal textbook for gamers who want to learn how.

Drama geeks will like the advice on making school-based stories exciting. Nerds will appreciate the new rules for learning and teaching. Popular kids will enjoy the discussion of social success at school -- and how that translates to the community at large. Even jocks get a few words -- not many, and mostly small ones -- on body training and steroids.

And for the teachers out there, here's a summary in bullet points: