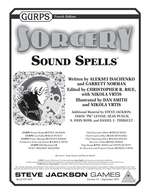 Even in the darkest rooms, sound is everywhere . . . and often underestimated. Turn that omnipresent ambience to your advantage, with GURPS Sorcery: Sound Spells.

Whether unleashing a Thunderclap, listening to Echoes of the Past, or erecting a Wall of Silence, the ears hold power the eyes cannot fathom. Discover the percussive power of Sound Spells! 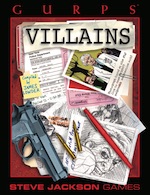 A pirate said to Alexander the Great, "Because I have only one ship, I am called a pirate. Because you have a great navy, you are called an Emperor."

Villains. Where would the heroes be without them?

The hero may be the star of his story, but it takes a prize villain to bring out the best in him! GURPS Villains is a compilation of dastardly foes from all ages, genres, and backgrounds. Crackpot spy-movie masterminds, backstabbing patricians, grim undead overlords, hard-bitten crime bosses . . . they're all here! Each villain is described both biographically and in game terms, and is accompanied by "bits" like fiendish plots, evil henchmen, devious deathtraps, and secret strongholds. GURPS Villains also includes a GM's guide to dramatic villain design and use. After all, everybody loves a "good" bad guy!

GMs can use this book for instant opponents, or choose a villain they like and build a whole campaign around him! There are over 50 villains (and villainous groups) with complete stats and writeups, including details of their "evil plans," in this survey of fiends and foes from all times and climes.