Enough full-color miniatures for every modern game you'll ever play! Over 400 human figures, plus hundreds of weapons, accessories, corpses, and other lie-flat counters. Soldiers and cops, Nazis and gangsters, cowboys and Indians, and lots and lots of modern-day civilians for all your games. 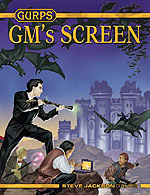 Put the amazing flexibility and power of GURPS at your fingertips with this data-packed GM's Screen. This screen features a gorgeous John Zeleznik painting with all of the Fourth Edition iconic characters, plus six panels full of all the crucial charts, tables, and other essentials from GURPS Fourth Edition. . . . complete combat tables, reaction charts, and other references to make the GM's job faster and easier.

Also included is a copy of the new Fourth Edition version of GURPS Lite, the 32-page core of the GURPS rules. GURPS Lite is a valuable rules summary, but it's also designed, in particular, as a teaching tool . . . it makes it easy for an experienced player or GM to introduce others to the system. A second 48-page book includes character sheets, forms, a master list of character creation features, and GURPS Update, a complete guide to converting your PC to Fourth Edition.

This screen is beautiful, useful . . . and yes, you can use it to hide your die rolls, too. 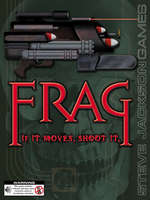 Game starts. Enemy in sight . . . Frag him! Grab his stuff! Run! Get a bigger gun! Grab some armor! There he is again! Frag him! Whoa, there's another one. Run . . . you're hit! You're down. Respawn! Grab a weapon! Start again!

Frag Gold Edition is a computer game without a computer. It's a "first-person shooter" on a tabletop. Move your fighter and frag your foes; draw cards for weapons, armor, and gadgets; move through the blood spatters to restore your own health! If you die, you respawn and come back shooting!

Easy to learn, fast-moving, fun . . . two supplements are already out, and more are coming!