By gently – and sometimes not so gently – mocking the fantasy dungeon crawl and the sacred cows of pop culture, the Munchkin® card game has stabbed and sneaked and snickered to the pinnacle of success. Along the way, the game has sold millions of copies, been translated around the world, and spawned more than two dozen sequels and supplements. Now it has its sights set on your bookshelf 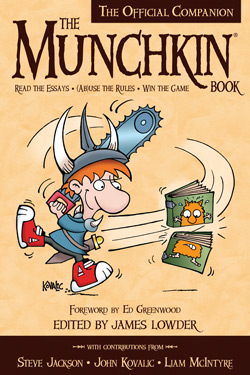 Smart Pop, the pop culture imprint of BenBella Books, and geek-legend publisher Steve Jackson Games are pleased to announce The Munchkin Book for fall 2013. The book is a lighthearted and suitably snarky celebration of all things near and dear to the munchkin heart, with game-legal rules included for each and every individual essay.

Leah Wilson, editor-in-chief of Smart Pop, says: "Our mission at Smart Pop is to entertain but also to enrich our readers' experience of the pop culture they love. Between the behind-the-scenes stories from Steve Jackson Games, the smart, funny commentary from all our contributors, and the exclusive game rules, this book should enhance both readers' game play and their appreciation of what makes Munchkin so great. At the very least, it's way more useful than a Chicken on Your Head."

"We're big fans of the Smart Pop essay collections at SJ Games," says line developer Andrew Hackard. "We're both proud and humbled that Munchkin will be part of their catalog. (Yes, both proud AND humbled. That'll probably be a Munchkin card soon.)"

When contacted for comment, Steve Jackson's reaction was more direct: "Munchkin is going to have its own book! This means we go up a level, right?"

Steve Jackson Games, based in Austin, Texas, has been publishing games, game books, and magazines since 1980. Its best-selling game is Munchkin, with well over 3 million copies of the games and supplements in print worldwide. Other top sellers are GURPS (the Generic Universal RolePlaying System), Zombie Dice, and Illuminati. Past hits have included Car Wars and Toon. Steve's very first game, Ogre, originally released in 1977, drew almost a million dollars' worth of Kickstarter support in 2012 for a super-deluxe edition to be released in late summer 2013. The company news page, the Daily Illuminator (sjgames.com/ill/), is the oldest continuously running blog on the Internet. For more about Steve Jackson Games, visit us at www.sjgames.com.

Smart Pop is the pop culture imprint of Dallas-based publisher BenBella Books, publishing smart, fresh nonfiction titles on television, books, film, and more. You can find us online at smartpopbooks.com.

Available at bookstores everywhere and through Perseus Distribution
Toll-free number for orders only:
1-800-343-4499. Orderentry@perseusbooks.com.

Munchkin is © and ® 2013 by Steve Jackson Games. All Rights Reserved.