Report to the Stakeholders for 2008

Steve Jackson Games Incorporated has a single stockholder . . . me. But we have a great many STAKEholders – that is, people who have a stake in the success of the business. These include our employees, our distributors, the retailers who carry our line, and, of course, the people who play our games! Less obvious stakeholders, but vital, are the freelance artists and designers we work with, the printers who create the finished product, the volunteers who demonstrate our games at conventions and retail stores, and the convention organizers who depend on us for game programming, prizes, and so on.

We try to stay in good communication with all our stakeholders. The main avenues of communication are our website, the catalogs and other marketing material that we distribute, and the letters that go to the 200+ people and companies to whom we pay quarterly or monthly royalties. But every year since 2004, I have written a report not unlike the "report to the stockholders" that you would expect from a public company. It's a useful exercise for me, and I've gotten a surprising amount of favorable feedback from all levels of the hobby. So here it is again.

We are, as I assume the reader knows, a publisher of games. Not all of these are physical products. An increasing number of them are digital downloads . . . PDFs and a few other types of file sold through our e23 site. We also publish two magazines: Pyramid (which became a monthly PDF release in late 2008) and the Journal of the Travellers' Aid Society, which is, as of this writing, a biweekly online zine.

We have been in business since 1980. We employ, at the moment, 18 full-time staff (and are recruiting for more), plus a number of contractors and part-time personnel.

We expected 2008 to be a very good year, and it was. Our 2008 gross was a bit over $2.9 million, only a small increase over 2007. However, it was considerably more profitable than 2007. We did much better with only a little more gross income because:

Our most important product, even more than last year, is the Munchkin card game. The Munchkin line, including the new Munchkin Quest boardgame, accounted for almost exactly 75% of our sales in 2008! Munchkin is now available in 13 languages. The GURPS roleplaying system is still the other main component of our sales, and the mainstay of the e23 PDF library. At the end of 2008, though, we took a number of GURPS 3rd Edition titles out of our hardcopy catalog; they are now in print only in PDF.

Executive summary: We were more profitable than last year, and I got some actual time off.

2008 had a lot of frustrating moments, but overall it was one of the strongest years we've ever had.

We shipped the new boardgame version of Munchkin. It was expensive to print, took far too much design and testing time . . . and turned out even better than we'd hoped. The reviewers have agreed. We'll keep supporting it; one supplement is already out, and another is set for 2009.

Our digital-product division, e23, is now four years old, and the second largest seller of downloadable files for the gaming community. Our e23 sales for 2008 were almost twice those of 2007. Our big goal for the year was to release at least 25 significant originals. We had 27!

However, we don't want e23 to become a pure company store, and we do want to take advantage of the "long tail" effect, so we will continue to sell quality PDFs created by other publishers. At the moment, our third-party contract offers dramatically better royalties than does our competition, and we'll do our best to continue that.

Our business organization remains reliable. Our financials have remained up-to-date for years now. We pay our royalties on time, and accurately. (Okay, mostly accurately; out of hundreds of payees, two pointed out problems last quarter, which is two more errors than we usually make. They were both right to complain, and we've corrected the errors. Writers, please, always, check your statements. Stuff happens.)

I've been saying for years that we wanted to do that, and in 2007, burnout caught up with me. So I tried to take some time off in 2008. It wasn't perfect; delays on Munchkin Quest and GURPS Vorkosigan erased a lot of planned vacation (and the Vorkosigan book still isn't done as I write this). But, largely thanks to Phil Reed stepping up to the plate as Chief Operating Officer and Designated Successor, some of the pressure came off, and I think 2009 might be better yet.

Last year, we decided that our successful hardcopy business would take complete priority over servicing the constant "expressions of interest" from big publishers wanting the computer rights to Munchkin, GURPS, Car Wars, Illuminati, or whatever. This proves to have been a good decision. 2008 brought us the same amount of computer licensing income that we'd seen in several previous years . . . that is, zero . . . and we didn't spend nearly as much time earning it.

Since we love the idea of computer games, we took some of the time that was saved by waving off licensing BS, and spent it in creating an iPhone app, the Fnorder. It got good reviews! We learned a lot . . . enough that a non-free app is largely coded, and being tested, as you read this. It is, of course, Munchkin support. We will see what we learn from that. 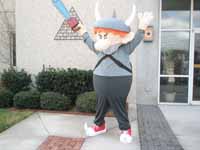 The places where we wanted a win and didn't quite get one, or where success and failure were mixed.

Our staff picture hasn't really improved. We rehired an experienced former editor, Andrew Hackard, and named him Munchkin Czar (though, for emergencies, he will also have some business cards identifying him as Brand Manager). However, two experienced employees left during the year. We still identify "lack of depth" as a weakness. Too many of our key people have no clear backup, and a couple of almost-key posts, such as Webmaster, are empty as I write this.

We continue to try to improve the quality of our workplace, at least for those staffers who we don't drive into frothing Cthulhu-worshiping madness. In 2008, we gave holiday bonuses totaling not quite 7% of 2008 payroll, plus modest raises. We also added a vision plan to our health insurance.

Online sales of physical goods were down a bit for the year, largely because we dropped a lot of outside products. When we finish crunching the numbers, we suspect that net income will be slightly up anyway, because the profit margin on our own products is better!

We certainly don't intend to drop all third-party releases. We continue to be the exclusive online retailer for some really excellent publishers, including Atlas Games and Grey Ghost Press, and we're happy with that.

We bought a mezzanine unit from Amarillo Design Bureau (they didn't need it any more, because they have a new building). It will give us some extra warehouse space when it's installed.

Thanks to heroic effort by our IT staff, the site is now in full compliance with credit-card industry standards. However, a shortage of coder-hours kept us from doing any real work on a new shopping cart or live inventory system, and we are now asking ourselves whether we really need those things as much as we need other things those coder-hours could give us.

For 2009, we won't set a goal past "consolidate, organize, and give good service."

Our general-interest online magazine, Pyramid, was taking a lot of resources and barely breaking even. We changed the format to PDF and the content to "mostly GURPS." We gave all existing subscribers six free months of the new version, which in retrospect seems massively overgenerous, especially to the lucky folks who only had a few weeks left on their subs at the time of changeover. The new version appears to be costing more, and because we gave away so many subscriptions, it's definitely in the red at the moment. The real test will come in a few months, when the free period is up, and the old users decide whether to resubscribe.

More projects than I would like are "stuck in the pipeline" . . . a lot of time and effort has gone into them, but for various reasons, they stalled and didn't start again. In some cases, the solution is to walk away, but more often, the answer has been "Just finish!" Easier said than done. I thought that 2008 would be a good year for "just finishing." Well, we got the PDF edition of Ogre Miniatures finished. That was good. But several other projects sucked up more effort – in one case, huge amounts of effort – and still didn't ship. I truly have no better answer than "fight off distractions, start fewer new projects, and try harder."

Things that definitely didn't go as they should have . . .

We never found time to get the Fnordcast off hiatus. Maybe someday we'll renew the experiment, but for now, the episodes already on line are all that there ever will be. I am disappointed.

Our UltraCorps online game project is such a bad case of "stuck in the pipeline" that it gets its own mention. It's gone on for another year, and now feels very much like Zeno's arrow paradox: we keep getting closer, but will we ever get to the point of launch? We're not giving up, though. It's a great game. If we could just push it that last bit to completion. (And part of the problem was that coding time, and my own attention, was drawn into the Fnorder project instead, both because it seemed much easier to finish and, face it, because it was new and shiny. Being distracted by shinies is bad, and we will have to get over it one of these years. Really.)

Writing this section was depressing . . . it was a tough year for the hobby. Traditional roleplaying continued to lose popularity, and big boardgames continued to gain, but the weakened state of the world economy is reducing many gamers' ability to buy the really big games. On the other hand, the drop in oil prices, and that same weakened economy, has staved off further price increases from the Asian factories, so at least those really big games aren't getting much more costly.

No new game-publishing powers made themselves known in 2008, and we lost WizKids. Late in the year, its parent company, Topps, abruptly announced that the division would be closing. I will miss WizKids; it was the best combination of creativity and strong backing that our hobby had to offer. WK had the "right stuff" to do good games, and the budget to turn them into really cool toys! Our hobby is diminished by its loss.

On the convention scene, GenCon SoCal was discontinued, and the parent company, GenCon LLC, gave us all a scare by going Chapter 11, but it appears it will emerge intact, still led by Peter Adkison.

And Gary Gygax, one of the creators of Dungeons and Dragons, died, leading to an outpouring of sorrow from the hobby . . . and an amazing amount of recognition from the mass media.

We didn't officially lose any significant distributors in 2008, but a couple have gone on life support.

SJ Games continues to work with various hobby-industry partners to accomplish shared goals. These include:

We still believe this sort of cooperation is our future. In fact, in a tough economy, those companies which don't learn to cooperate are likely to be among the first to fall.

Although we had a great year in 2008, we're entering 2009 cautiously. It's a bad time for some of our stakeholders, and for us, it should be a year of consolidation and organization.

But we'll also make some games . . . In 2007 and 2008, our basic planning tool was "Set priorities!" Both years were very good. Coincidence? I think not. So the priorities for this year are: