GURPS Horror, Fourth Edition, is the latest incarnation of one of the most popular GURPS supplements ever . . . and now it's been given a new lease on unnatural life by horror master Kenneth Hite. Its time-tested advice on running scary campaigns has been expanded to include current trends and tropes, showing you how to run everything from old-fashioned Gothic and supernatural horror to the latest J-horror, survival horror, and torture horror. The famous bibliography of unspeakable tomes and frightening films has grown to match. And the monsters return with unpleasant friends, as monsters inevitably do – all with GURPS Fourth Edition racial templates that let you use them as foes, as sinister Allies and cursed Alternate Forms, and even as PCs! Add the new and disturbing powers, the expanded rules for madness and corruption, and countless other updates, and you have everything you need to drag your horror campaign screaming into the 21st century. Return of the (un)Living Munchkins!

Shuffle and shamble your way to victory with 112 new cards for Munchkin Zombies. Wield your Trained Attack Flies and your Prehensile Tongue against the Zombie Gamer! Be the Rankest of the Rank and use the Power of SCIENCE against the dread Survivalist. Gain a new power . . . Hungry . . . and play a new Mojo, the horrible Patchwork Zombie!

This is an expansion for Munchkin Zombies. It is not a stand-alone game. 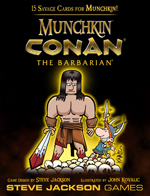 At last . . . the Munchkin meets the mightiest barbarian of all!

Based on the new movie, coming in Fall 2011, these cards let you wear the Mask of Acheron or the Barbarian Booties . . . wield the Sword of Corin or the Stygian Talons . . . and defeat the Sand Warriors, the hideous Dweller . . . or Khalar Zym himself!

The backs of these cards match the original fantasy-based Munchkin set, but Conan can kick monster butt in any Munchkin game!

This is an expansion for Munchkin. It is not a stand-alone game. This is NOT a collectible or randomized set. Every Munchkin Conan the Barbarian pack is the same as every other.

Stop Carrying All Those Pennies!

If you are using a level counter that matches the set (or one of the sets) you are playing, start the game at Level 2 rather than Level 1! Roll the die before the game. The high roller gets to pick his level counter first. If the order matters after that, go in descending order of rolls. 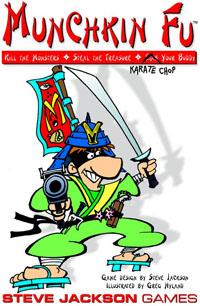 If you loved Munchkin . . . look out. Here they come again.

"I'm a Ninja with the Dragon Tooth Katana!"
"I'm a Monk with the Sai of Spleen Mangling. Fear my Drunken Monkey Kung Fu!"
"I'm a Yakuza with a gun. Run away!"

The Munchkins are back! Now the game is chop-socky Hong Kong action. The characters are Samurai, Ninja, Yakuza, and Monks. The foes are mooks, demons, and assorted bad guys from all the worst martial arts films you've ever seen. Collect treasures and learn new styles to build up your character's powers. Kill the monsters, take their stuff, and be the first one to 10th level! And this set has a special treat. We asked five of our favorite Comic Guys to do one card each. So in this set you'll find:

Munchkin 4 – The Need For Steed (Reprint)

Munchkin 4 – The Need for Steed is an expansion for the original Munchkin – 112 more cards for killing monsters, stealing treasure, and backstabbing your fellow players. This set introduces Steeds, the trusty mounts of legend . . . Oh, wait – this is Munchkin! So these Steeds include not just the Dragon and the Tiger, but the Giant Mutant Gerbil (drawn by guest artist Shaenon K. Garrity of Narbonic), the Chicken, and Big Joe, who might be a Steed or might be a Hireling. It's hard to tell.

Hireling? Yes indeed, The Need for Steed has lots and lots of Hirelings, who look quite a bit like Sidekicks from Super Munchkin, or Minions from Munchkin Bites! Add these valuable characters to your retinue, use their special abilities, and sacrifice them to save your own skin! Munchkin is not a drinking game. Really.

The Munchkin 10th Anniversary Shot Glass may be used in any Munchkin game or its sequels.

When fighting a monster on your turn, you may take one complete shot of Strength Potion* from the Munchkin 10th Anniversary Shot Glass to get a +10 combat bonus. You may do this as many times as you like during a game, but every drink of Strength Potion after the first costs you a level. You may only benefit from one Strength Potion per combat.

* The owner of the Shot Glass is the sole judge of what liquid(s) will make up the Strength Potion. In Nomine: Fall of the Malakim

L.A. is run by the forces of Hell, and any angels there exist at the whim of the demonic elite. But the demons are about to find out what happens when you push a Malakite too far . . .

Fall of the Malakim is Book Four of The Revelations Cycle for the In Nomine roleplaying game. In addition to an in-depth look at Los Angeles and its celestial denizens, Fall of the Malakim contains extended Superior write-ups for David and Lilith, introduces the rare Bright Lilim, and contains two complete adventures, "The Premiere" and "Fall of the Malakim."

You will need the In Nomine basic rulebook to play. Books One, Two, and Three of The Revelations Cycle (Night Music, The Marches, and Heaven and Hell) are useful but not necessary. When it comes to helping craft exactly the kind of game you want, GURPS has choices galore. This month's Pyramid -- the PDF magazine for roleplayers -- is dedicated to optional tweaks and techniques that shake up the system, adding new possibilities or challenging the underlying assumptions of the game. This issue's molecular manipulations include:

This Pyramid also presents Steven Marsh's Random Thought Table, a GURPS-flavored Murphy's Rules, and more. With this issue, we encourage you to break the rules! Have you seen the mark of Cthulhu? Now control . . . the marker of Cthulhu!

This solid metal case turns a regular disposable pen or marker into a designer writing tool. The Cthulhu Sherpa will last for YEARS. Unless you put it down and take your eyes off it. In that case, it will probably be gone in 60 seconds. It's that cool.

It's purple. Very purple. It carries the image of Great Cthulhu and the "Game Over / Cthulhu Wins" slogan. A perfect gift for the cultist in your life . . . or gloat over it yourself!

The Cthulhu Sherpa is available in VERY limited quantities: We made 250, but some of those are reserved for staff, prizes, and so on. Because it's a bigger print run than the original Munchkin Sherpa, it costs only $40. It includes a purple marker. Get one now before they're gone!

Sherpa is a trademark of the Paradise Pen Company. Cthulhu Dice is not a drinking game . . . but now you can drink in style with the Cthulhu Shot Glass. These 1.5 oz shot glasses feature a spectacular effect that shimmers as Cthulhu stares at you from the side of the glass. Buy one for yourself or buy a set for your next party so that everyone can go insane together. Cthulhu Dice is not a drinking game . . . but now you can drink in style with the Cthulhu Shot Glass. These 1.5 oz. shot glasses are Black with a Gold Cthulhu. Beware -- each drink will steal your sanity. Buy one for yourself or buy a set for your next party so that everyone can go insane together. 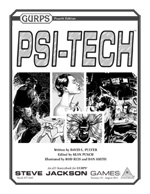 Where GURPS Psionic Powers brought you powers of the mind, GURPS Psis presented the people who wield them, and GURPS Psionic Campaigns showed how to build settings around those elements, GURPS Psi-Tech is your gateway to the realm of psionic technology. It explores the paranormal interface between mind and machine . . . everything from the tools of real-world parapsychologists to the wildest gadgets of science fiction and fantasy. Within you'll find rules for psychotronic gadgetry and bio-psi technology that can enhance or counter psi powers at any tech level, along with guidelines for fitting them into your campaign. Whether your adventure features fantasy mentalists using herbs and crystals to boost their abilities, modern-day conspirators hacking out brains and putting psi-suppressants in the water, or super-gadgeteers and future-folk wielding psionic death rays and amplifier helmets, you've come to the right store to shop. When you're roaming through a dungeon and you meet something elemental, transcendental, or hell-bental on destruction . . . it's time to get mental!

With this thought-provoking tome, you get everything you need to bring mental mayhem into your Dungeon Fantasy campaign. Get GURPS Dungeon Fantasy 14: Psi, so you can get your head in the game! 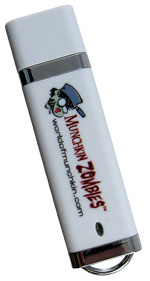 Once per game, you may remove a monster from combat; place the Monster card in your hand. It grants neither levels nor treasure. If this was the only monster in the fight, the combat ends immediately. The current player may Loot The Room, but may not Look For Trouble.

Munchkin is not a drinking game. Really.

The Munchkin 10th Anniversary Shot Glass may be used in any Munchkin game or its sequels.

When fighting a monster on your turn, you may take one complete shot of Strength Potion* from the Munchkin 10th Anniversary Shot Glass to get a +10 combat bonus. You may do this as many times as you like during a game, but every drink of Strength Potion after the first costs you a level. You may only benefit from one Strength Potion per combat.

* The owner of the Shot Glass is the sole judge of what liquid(s) will make up the Strength Potion.